A while back, I took a stab at outlining the storytelling elements.

But I also wanted to apply these classical elements to an actual story, to see how they would work. The choice of a great story was a no-brainer:

I was born in 1979, so Star Wars was an important part of my upbringing.

Here’s how I structured the storytelling elements to make them usable:

Right at the beginning of the first real Star Wars movie, you get to see Star Destroyers in space shooting lasers and Darth Vader taking Princess Leia hostage while they literally negotiate the whole dramatic setup before Leia’s taken to her cell.

If it’s a story about space fighting, you need to show some space fighting up-front, directly in the beginning. Otherwise, the audience will feel surprised (not in a good way) or even cheated.

The Empire uses a tractor beam, but we’re drawn into the story by two droids, R2-D2, and C3PO. R2-D2 knows something, but can only beep and blip, so C3PO has to ask lots of questions and repeat the answers to pull the viewer into the story.

It’s important to give the audience enough information early on, otherwise, they won’t have a chance to know what’s going on. In this case, the C2PO character doubles as the comic relief, and it’s quite common to use these types of characters to pull people into the story.

After having a fight with his alleged parents, Luke Skywalker runs away from home and gets attacked by Sand People, however, is then saved by his mysterious uncle, Obi-Wan Kenobi.

The incident must be intriguing, yet believable.

R2-D2 shows his message from Princess Leia, thus opening up a whole new world for Luke Skywalker and then Obi-Wan Kenobi explains about the Jedi.

The revelation is special because the audience already knows the secret. They must anticipate the revelation and welcome it when it finally arrives.

5. Point of No Return

Luke Skywalker then realizes his life will never be the same as he rushes home to find his family butchered. He decides to follow Obi-Wan Kenobi and the droids on their adventure to save Princess Leia.

The Incident, The Reveal, and the Point of No Return are often quite close to each other in most narratives and they might even be bundled together in the same scene or sequence. Together, they lead up to this:

The audience must want Luke to go off on this adventure before he himself decides to go. This buy-in from the audience is absolutely crucial.

Luke Skywalker, together with new companions Han Solo and Chewbacca, manages to save Princess Leia, but at the same time, Obi-Wan Kenobi is struck down by Darth Vader.

To develop the character arcs, there must be a series of struggles, and what better way to demonstrate this by allowing the main characters to experience a false win?

As the rebels mobilize to strike against the Death Star, they suffer heavy losses against a superior military force. The all-is-lost moment is condensed into Admiral Ackbar’s immortal line, “It’s a trap!”

The purpose is to get the audience to truly believe that there’s absolutely no hope of success. They must feel true despair on behalf of the characters.

With Darth Vader himself in a Tie-fighter and Luke Skywalker as one of the few surviving pilots in his and R2-D2’s X-Wing, Luke gets surprising help from Han Solo, returns with the might of the Millennium Falcon.

In the darkest hour, you want the audience to experience that exhilarating notion of hope, like a ray of sunlight through complete darkness. This passage is often about friendship because we need our friends to accomplish the impossible.

Luke Skywalker completes his character arc for this movie by summoning the spirit of Obi-Wan Kenobi and by using the Force, he saves the day, and more importantly, takes his first real step towards fulfilling his destiny to become a true Jedi Knight.

By experiencing how someone can overcome epic struggles and grow as a person in the process, we sense a shimmer of hope for our own lives as an audience. In our admiration for the hero, we feel good about ourselves.

Team Skywalker get medals, but more importantly — their companionship is now stronger than ever and they’re now ready to face the Empire yet again.

Since the audience has actively taken part in the story, sharing decisions and experienced struggles emotionally, they want to be rewarded through the main characters. They want to feel that they, too, have grown from this story and that they now are better equipped to face any challenges in their own lives.

Classic stories are often the easiest to analyze because of how clean their dramatic builds are. Try finding these components for classics like The Lord Of The Rings — or why not Jaws!

For corporate purposes, I prefer to use this simplified script:

Promise. Why should anyone read your post? A big promise ensures your readers to know what to expect from this story. Of course, you need also to deliver on your promise.

Conflict. You need to explain that you understand the frustration and that you’ve been there yourself. Why should anyone trust your story otherwise? Most writers rush this to get to the solution, but all good stories focus more on the hardships than on anything else.

Discovery. When, how and why did you decide to find a solution to your problem? A “point-of-no-return” is needed to engage the readers in your story. Tell them when, how and why.

Solution. As for the solution (or should I say resolution?), keep it brief and to the point.

Call-to-action. And finally, since you’re creating a blog post, you should leave the reader with a clear notion of what to do next!

For honing your writing skills, these are my go-to books on persuasive writing:

… and last, but not least, my favorite software for dramatic writing:

One more thing. As I’m writing this, we’re expecting a baby boy and my wife is currently five days past her due date. If all goes well (and I think it will!) — I hope to have many years of storytelling in front of me.

May the Force be with all of us! 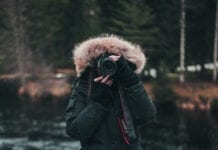 Influencer marketing is a-changing — are you ready?

William Faulkner on writing from the heart

Everything is a remix (remastered 2015)

God is dead — at least by definition

The Public Relations Blog
Contact me: jerry@doctorspin.org
Web design, construction, and SEO by Jerry Silfwer.
We use cookies to ensure that we give you the best experience on our website. If you continue to use this site we will assume that you are happy with it.Ok